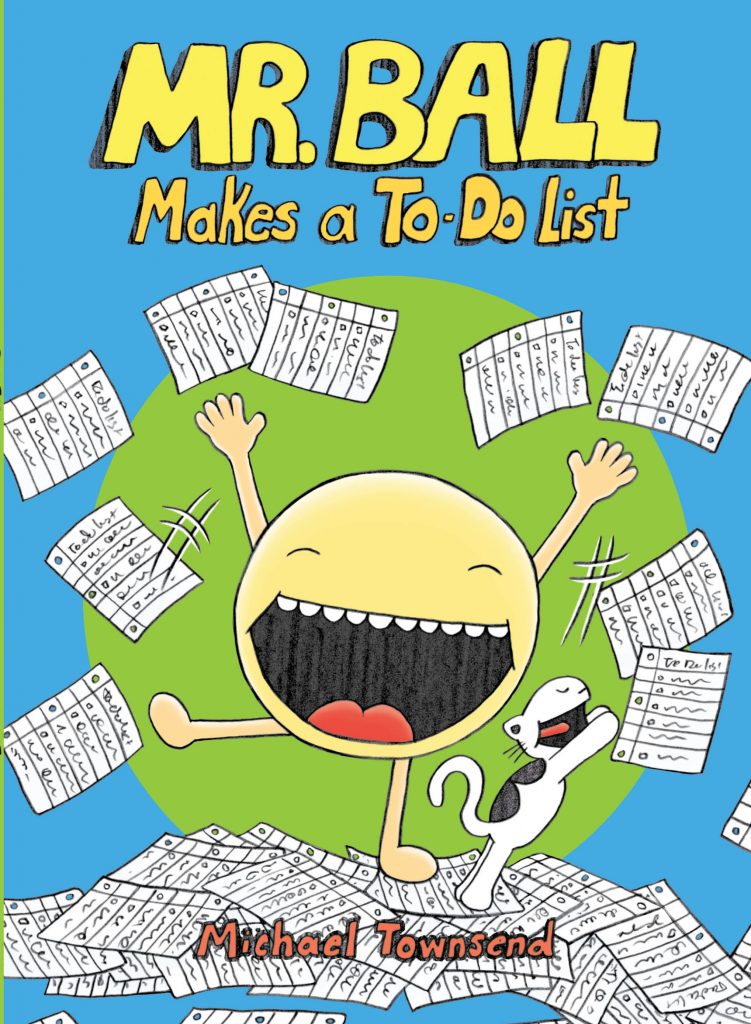 Will his to-do list be too hard to do?

Mr. Ball loves to make to-do lists! But he NEVER finishes them. Will the easiest to-do list ever help him break his unfortunate history of didn’t-do failures? Angry bees, a funky skunk, and a bathtub full of tomato sauce provide challenging obstacles as Mr. Ball tries to finally check EVERYTHING off his list! Featuring a kid-perfect brand of silliness, real-kid concerns and feelings are reflected in a story that offers a simple text, endearing characters, and the right amount of action.

Character-based and comics-style, Mr. Ball Makes a To-Do List is Mr. Townsend’s debut adventure in the new JUMP-INTO CHAPTERS! series created to inspire independent reading and offer plenty of nutty fun. The well-rounded Mr. Ball bounces in to entertain and strengthen the skills of emerging readers.

A manic Pac-Man lookalike loves making to-do lists, but he has a certain amount of trouble (read: major difficulties) following through.

Townsend adopts a thoroughly overcaffeinated style conveyed in loud colors! huge sound effects! helpful directions for readers (“THIS BOOK STARTS HERE”) and exclamation points aplenty! He bounces his globular, easily distractible taskmeister through two days of slacking off after good starts—culminating in an attempt to hug an angry bear that Mr. Ball survives only thanks to a rather-too-eager skunk. Enter Mr. Ball’s animal friends, who assure him that “You really are a smelly stink-monster!” but fall into an exuberant group hug once he washes off the reek in tomato sauce. That sauce also comes in handy for the last item on his agenda, which is having dinner: One pot of spaghetti later, his whole to-do list is at last “To-done!”

Like an unholy union between the Dick and Jane series and R. Crumb–style psychedelia, Townsend’s contribution to the Jump Into Chapters line introduces an animate yellow ball with an enormous grin, rubbery limbs, and manic energy that never abates. To-do lists are Mr. Ball’s passion, and he attempts to knock off a few items over the book’s four sections, with limited success. The house Mr. Ball builds for his pet cat, Ms. Kitty Cow, winds up a misshaped pile of lumber, and he only paints half of his own house before falling off a ladder, dousing himself with Pepto-Bismol pink paint, and opting to spend the day chasing butterflies instead. Townsend’s (Cute and Cuter) hero is as much punching bag as protagonist—later adventures have him punted into the sky by an unhappy mama rabbit and sprayed at close range by a skunk. The adrenalized emotions, rampant slapstick, and comics-style format make this a good pick for kids who generally would rather watch Sponge Bob reruns than pick up a book.

Enter Jump Into Chapters, a new series of books created to transition readers from picture books to text-heavy chapter books. The first three books in the series have between 72 and 96 pages, but very few words per page. In short, the page count increases, while the word count remains low. These books are designed to fill an important gap in reading materials.